Despatch Industries’ legacy is founded on the critical principles of service, quality and innovation. Using these principles as guidelines for its business has created a path of great growth and success for Despatch in its 100+ year history. The company prides itself on producing the highest quality products possible, and providing an unmatched level of customer service. The innovative spirit of the company drives employees to seek new technologies and solutions to better meet customer’s needs. Though Despatch is a leader in the markets it serves, the company remains nimble and diversified in order to quickly respond to changing times and market environments.

The company’s philosophies and innovations have allowed Despatch to grow and thrive for a century, and to move full-speed into its next 100 years of success.

1902: Albert E. Grapp starts his first business, Despatch Industries with plans to service and repair electrical items that were just beginning to be invented in the early 1900s. It wasn’t long before the innovative entrepreneur was building electric heaters for frigid Minneapolis streetcars and developing flour drying ovens for milling companies like Pillsbury.

1904: Grapp devised a small flour testing oven for Pillsbury. The oven was lined with tile for more consistent heating and provided heating accuracy to plus or minus 10 degrees Fahrenheit – a first in the business.

1913: Despatch Manufacturing Company was officially incorporated in the state of Minnesota.

1916: Grapp invents an electric oven for baking bread. The product was packaged as the Electric-Maid Bake Shop, a franchise system to sell complete bakeshops.

1921-1923: Despatch has customers in six states. Customers include the Bloom Brothers, a manufacturer of Indian moccasins with an order for a unique leather drying oven; and Brooklyn Street Railway in New York City that ordered an electrically heated oven to dry out motor generators.

1924: Despatch finances its first power hacksaw, drill presses and small lathes to streamline steel cutting instead of doing it all by hand.
Despatch creates its own sales organization and hires the company’s first agent, based in Pittsburgh.

1925: Despatch receives a request from Moore Bedding Company to build its first continuous conveyor oven for baking bed springs after they were dip-painted.

1926: Despatch develops a relationship with Bennett Insulation Company, a Minneapolis neighbor, and is entered in a new industry, creating ovens to dry piping insulation.

1932: Grapp helps the company survive the Great Depression by inventing a beer spigot using a cycle valve that could be used to pressurize a beer barrel. His invention comes just in time as Congress repealed prohibition in 1933. 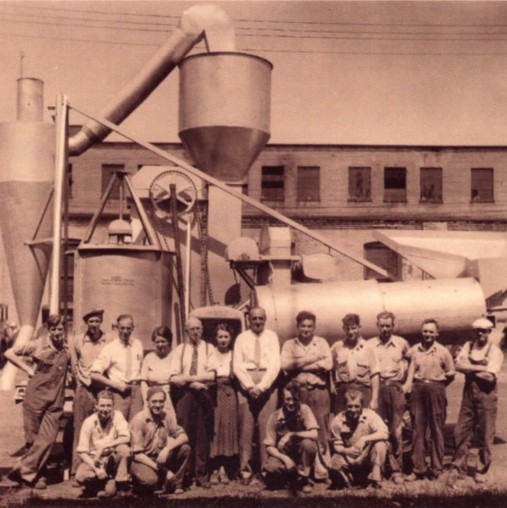 1934: Despatch makes its largest installation to date when it creates a system to process a variety of parts for Seeger Refrigerator Company.

1935: Mr. Grapp, along with a couple of promoters, develops a new machine to be used in gold mining.

1938: Despatch builds ovens large enough to supply up to 3.5 million BTUs, and some designs include multiple conveyors. The company designs an oven for the Stetson Hat Company.

1939: World War II begins. Despatch is hired by the U.S. Navy to build waterproof ovens for repair shops on ships, as well as ovens for treating airplane parts and ammunition shells.

1941: America enters World War II and new opportunities arise for Despatch. The company makes its first high-temperature furnace to treat magnesium castings used in airplane wheels and other structural parts of planes for the Hitchcock Foundry of Minneapolis. Despatch builds the first experimental furnace for steel shell case manufacturers at the Frankfurt Arsenal in Philadelphia.

1948: With its growing expertise, Despatch starts producing tower, batch and molding ovens for large US companies, including a fully-automated system measuring 200 feet long for John Deere.

1952: Despatch designs and builds its first gas-fired, radiant tube quick quench furnace. The furnace was elevated, and its floor opened up to a quenching pit full of water.  This unique system is widely used to heat-treat aluminum spars and wing sections for airplanes.

1958: Despatch sells a lab oven to Dave Packard, the co-founder of Hewlett Packard.

1960-1962: Despatch designs a sophisticated and fast conveyor system capable of handling hardboard pieces ranging from one foot to sixteen feet for the wood pre-finishing industry. The company invents a semiconductor diffusion furnace and a custom oven for the pharmaceutical industry.

1968: Despatch produces its first commercial, self-cleaning convection oven and – in a joint venture with Possis, another Minneapolis company – creates a shrink-wrapping system.

1970: Despatch is a dominant player in semiconductor burn-in equipment for the rapidly growing U.S. electronics industry. Despatch offers a standard line of ovens, as well as custom units. Revolutionaire, a three-deck pizza oven was developed by Despatch in 1970.

1982: Despatch acquires Ransco Industries, a California-based company that specializes in cold process equipment and starts producing its first line of environmental chambers. Despatch supplies a curing oven system for the production of latex gloves to Becton-Dickinson.

1987: Despatch ships and installs the first U.S. made, self-sterilizing depyrogenation tunnels. A patent on this technology, that dries and sterilizes drug bottles, gives the company an entry into the high-speed, injectable drug-filling market.

1994: Despatch develops the UV360, a surface decontamination system for the pharmaceutical industry that decontaminates pre-sterilized packages before they are taken to sterile environments.

1995: PCC Small conveyorized ovens were used in a variety of drying and curing operations for electronics manufacturing.

2005: Despatch is introduced to infrared technology and enters into the solar cell manufacturing market with the launch of its new CF/CDF metallization firing and drying furnace product line.

2013: Despatch implements new manufacturing processes that reduces lead times by 50% or more. The company restructured its manufacturing facility to allow for in-lining of production equipment and assembly stations that improve flow and minimize production time 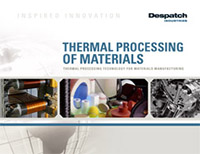 Review our job positings and see if you qualify for a challenging and rewarding position at Despatch Industries.

Despatch Industries is one of ITW’s 825 decentralized business units. ITW employs approximately 60,000 men and women who are focused on creating value-added products and innovative customer solutions.