To ensure patient safety, pharmacies that perform aseptic compounding must depyrogenate glassware and implements used during the compounding process. Premier Pharmacy Labs, Inc., is a Pharmacy Compounding Accreditation Board accredited facility that specializes in the preparation of sterile formulations.

As a certified 503B special compounding pharmacy, they needed an efficient dry-heat oven with a small footprint to conserve valuable cleanroom space; an oven that could: 1) more quickly depyrogenate glassware (beakers, vials, flasks, prescription bottles, etc.) and various metal devices used in the cleanroom in a quantity of 100 or more items per batch, 2) hold 200 lb. of glassware per batch, 3) record data about the depyrogenation processes electronically, 4) capture those data on a computer, 5) provide specific safety features that would protect the oven operator from injury during any heating cycle, and 6) meet USP Chapter 797 and cGMP standards. With these criteria in mind, they purchased the Despatch LCC1-51 benchtop oven, which has proven to be a perfect solution for them.

The stackable feature of this oven is a plus because a cleanroom is a very compact area and the most expensive space in a pharmacy. As a compounding business grows, using stackable ovens maximizes cleanroom space. All interior seams of the LCC1-51-4 have a continuous weld on the insulation side (this protects the work chamber from contamination), and the stainless-steel interior and exterior are easy to clean and disinfect. A Magnehelic gauge, which monitors changes in oven pressure that might indicate a gasket leak or damage to the HEPA filter, indicates when that filter or the gasket should be replaced.

The LCC1-51 model can be integrated directly into the cleanroom electrical system or equipped with an electrical-outlet plug. When the oven was installed in the cleanroom it was positioned to ensure easy loading and unloading, the greatest ergonomic benefit during compounding, and the most efficient discharge of exhaust gases to the outside.

This LCC cleanroom dry-heat oven is dedicated strictly to the depyrogenation of compounding implements and glassware. It can be operated continuously at its maximum temperature of 260°C (500°F) and heats relatively quickly. The air-temperature unit is equipped with a forced-exhaust fan to ensure rapid cooling. The oven’s recirculated airflow is 100% HEPA-filtered for ISO class 5 (class 100) operation throughout the process cycle. During all oven cycles, a door interlock switch turns off the heater and fan when the oven door is open.

Before using the oven, the operator manually rinses, in sterile water for injection, the vials or tools to be processed; dries them under a laminar flow hood; covers them with foil; positions them in the appropriate map pattern; places, into the batch, a biological indicator (a sealed test vial containing a known amount of specific endotoxins) that reveals whether, at the end of the last heat cycle, at least a 3-log reduction in endotoxin levels has been achieved; places the items in the oven; locks the oven door with a removable key; and uses a keypad to select a previously programmed protocol that ensures complete depyrogenation. A visual display (a red, green, or yellow light) indicates the status of the heat cycles, and the operator can abort any cycle by pressing the emergency stop button. At the end of the heating process, an alarm sounds to alert the operator. The depyrogenated items are then placed under a laminar flow hood before being filled with a sterile preparation, or they are packaged in sterile bags labeled “For later use” and are stored in a controlled-temperature environment. After each use, the oven is cleaned with sterile alcohol.

The LCC1-15 can be validated via installation qualification/operational qualification/performance qualification (IQ/OQ/PQ) testing to meet cGMP standards. To validate this oven, Premier Pharmacy Labs hires a cGMP consultant to perform, twice each year, the complete load mapping for worst-case scenario cold spots and as well as other evaluations that must be done to ensure compliance with process qualifications. Each time the oven is used, they verify its function by placing a biological indicator in each batch as described above. After the depyrogenation of each batch, the oven generates an electronic record (which can be displayed on our computer screen) of each process performed.

Premier Pharmacy Labs has been very satisfied with the performance of the LCC1-51. They have experienced no problems with its operation, and it enables them to depyrogenate 5 times as much glassware as they were able to process with the oven they previously used. 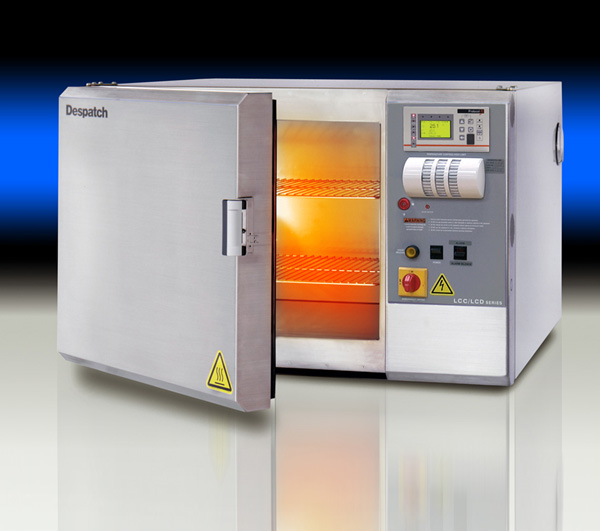