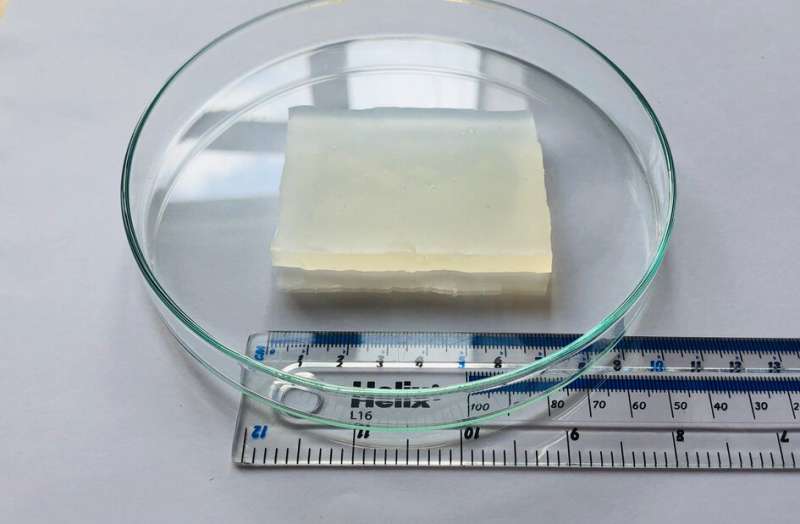 Researchers at the University of Cambridge have created a new type of hydrogel, which, even if it consists of 80% water, can retain its shape even if an elephant steps on it.

As the team that created it explains, the hydrogel appears soft and feels like a jelly on the hand, but it becomes ultra-hard and shatterproof when compressed. In the following demonstration video, a car runs over a piece of the gel multiple times, but it remains intact.

The trick to achieving this behavior and mechanical properties is to connect the hydrogel molecules with cross-linking chemical bonds. Then, when pressure is applied to the material, these bonds come closer together and interlock, forming a solid structure that can withstand impressive levels of force from any direction.

The scientists found that they can easily adjust the resistance to compressive strength by altering the molecular structure of the guest molecules inside the handcuff, thus ending up with a range of results going from rubber-like to glass-like states.

When no force is applied to the hydrogel, it remains soft and stretchy. Hence, its properties are adaptable, giving this material a versatile nature that opens up peculiar application potential. As the scientists comment, the properties of the novel hydrogel may appear to be at odds with each other, but they are reliably retained and dependent on the applied force.

A future iteration of this gel could change properties not based on the force but the temperature, surface moisture, or other changeable factors, but for now, force is the main focus of the study.

This is the first time we see a hydrogel of this kind, and it’s not something that exists theoretically but in the real world. The University of Cambridge believes it will open a new chapter of high-performance soft materials used in biomedical, bioelectronic, and other specialist applications.